Since being released in late 2021, the game Wordle seems to have taken the Internet by storm, spawning a host of similar games such as Dordle, Quordle, Octordle and Sedecordle, each of which presents a number of Wordle-like instances to be solved together.

In this post, we'll look at Untangle, a tool which helps in solving these puzzles.

The puzzles all consist of one or more instances of a word game based on the Mastermind model. Each instance has a secret five-letter word which has to be identified correctly within a fixed number of attempts (guesses). That number depends on the type of game:

How can a tool help?

Let's see how a tool can help in solving these puzzles. What are the problems one might need help with?

Untangle helps with these problems as follows:

It's perhaps easiest to see how it works through a short (around one minute) video, taken during an attempt to solve the Daily Dordle #0106:

In this case, we got pretty lucky with our guesses. But you should be able to see how Untangle shows the possibilities remaining at each stage for each puzzle instance in the game. Here's a diagram that shows the different parts of the Untangle user interface (for a single puzzle instance): 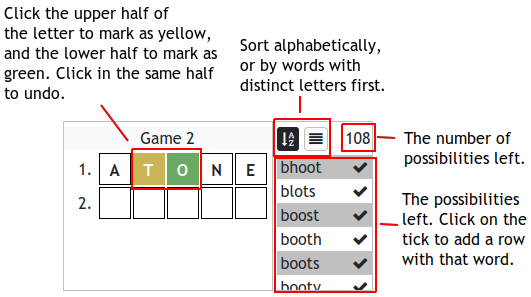 How does it work?

The approach used by Untangle is simple. Based on the clues given so far, a regular expression is calculated for each letter position indicating which letters can or cannot appear in that position. The expressions for each letter position are concatenated to form a pattern for the entire word. The roughly 13,000 possible words are each matched against the pattern, and those that don't fit are discarded, leaving the rest as possibilities to be displayed. While 13,000 words seems like a lot – and when playing Sedecordle, there are 16 sets of these to be checked – most computers and phones these days have no trouble doing these checks quickly enough to provide responsive feedback to users.